In the following days, it is highly likely that India is adopting a state of complete lockdown, a progressive step towards tackling the prevailing Covid-19 pandemic.

Today, our Prime Minister called for a nationwide curfew between 7 am-9 pm. Many speculated this as preparation for the upcoming lockdown. As a mark of respect and appreciation to the healthcare workers, he encouraged us to clap at the end of the curfew.  Given that the speech reminded me of my morning assemblies in the early stages of my schooling, people came up with their own interpretations of location. Of course and misinterpretations of his address to the nation didn't take long to show.

Negating the entire purpose of such a curfew, which was aimed at encouraging self-isolation, mass gatherings (more than the usual) of people was seen across the nation at the end of the curfew. Why? To clap! What followed questioned the very definition of clapping. To an untrained eye, it probably came across as a competition judged by the number and density of people, and tools used to make noise. Boy, did we try to outdo each other! True to the spirit of dances in our films, some gatherings showcased creative, though awful renditions of Bollywood music (using plates and spoons) and surprisingly well-coordinated simpleton dance moves (it might be in our blood after all!). More on that later.  Safe to say that we aren't safe! What was yet another day of self-isolation, frustrating due to the absence of tennis, turned out to have a rather unusual ending. Well, unusual to city life in Mysore is better put for what I'm about to share is but a part of every day in the wilderness of Kodagu.

At around 10pm, I received a call from my granduncle, who is about 85 years old. One can imagine what a queasy situation this is. I don't think he's ever called me at that hour. My guess if that we were both equally surprised by how short our conversation lasted. He, along with my grandaunt invited mum and me to head over to their place if possible, which is about 2km away from ours.

What followed is best explained by this photograph. 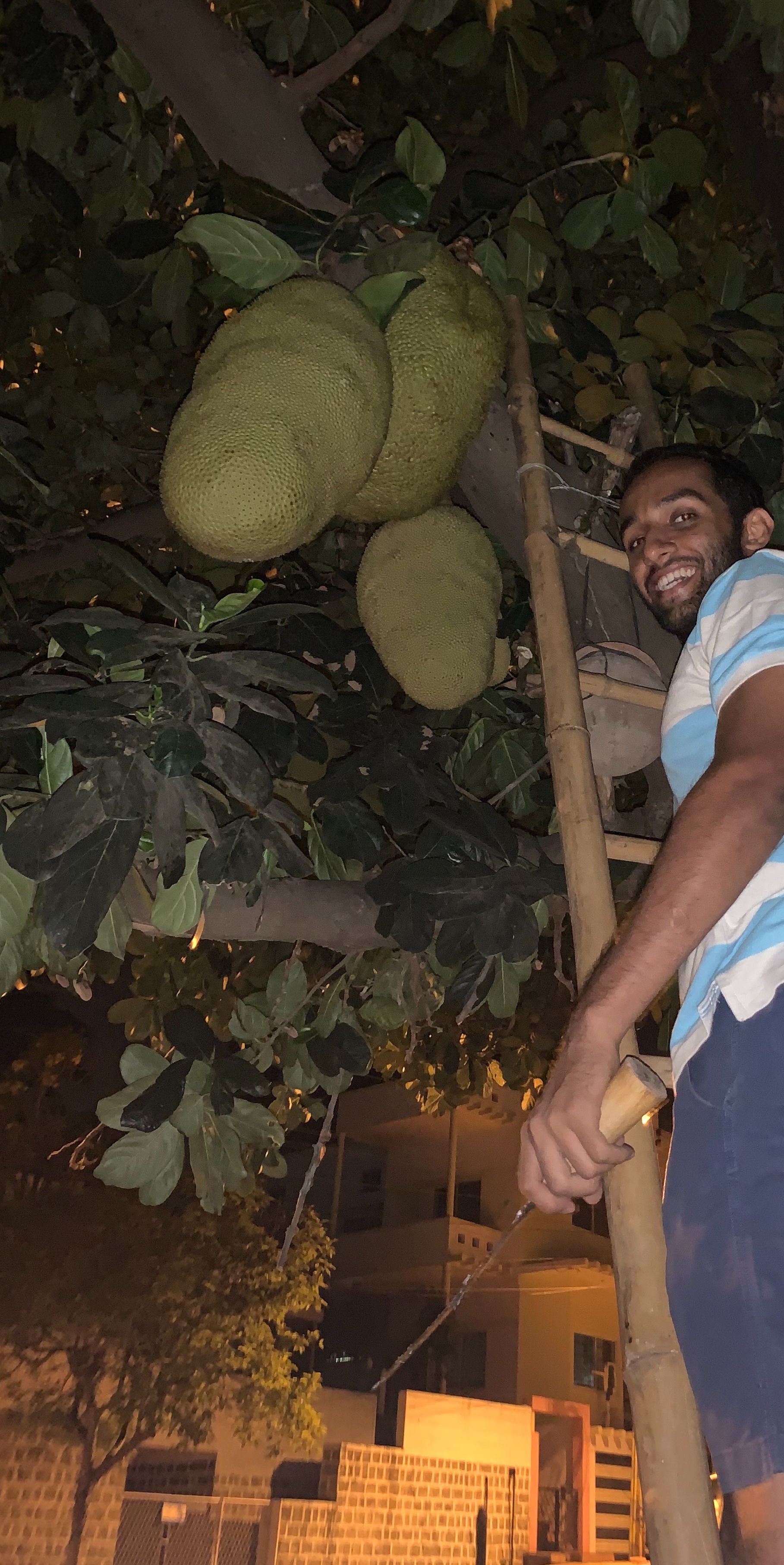 My granduncle, troubled by the thieves who stole low hanging jackfruit from the tree which grows outside his house was adamant that don't get the remaining. Knowing him, he would've spared a few if they asked for permission but they didn't!

I, on the other hand, felt as joyous as an elephant given permission to pluck his favorite fruit. For those who aren't familiar with these gentle (not always) giants, jackfruit IS their favorite fruit. This city elephant, however, lacked a trunk, strength, and experience to bring down his favorite fruit.  Troubled by the thought that this elephant hasn't plucked a jackfruit before, granduncle (remember he's 85) single handedly brought down a ladder and with 'detailed' instructions like "climb this ladder and bring down that fruit" he let my roots take over! Kind of reminded me when I was 'taught' to ride a motorbike: "Here are the keys, thats the bike...go on then"

Why was mum there?  Let me put it this way. Ask mum the choose between jackfruit and Rachith, she'll choose the former! Also explains the focus on the jackfruit (and not me/ladder/tree) in the photograph.

One jackfruit down and rest followed! My mum probably thought it was raining jackfruits...which is her dream (no, seriously!)

To get the fuit out is a process in itself and I was pleased to be somewhat better at this. Ofcourse full rights to the fruit were claimed 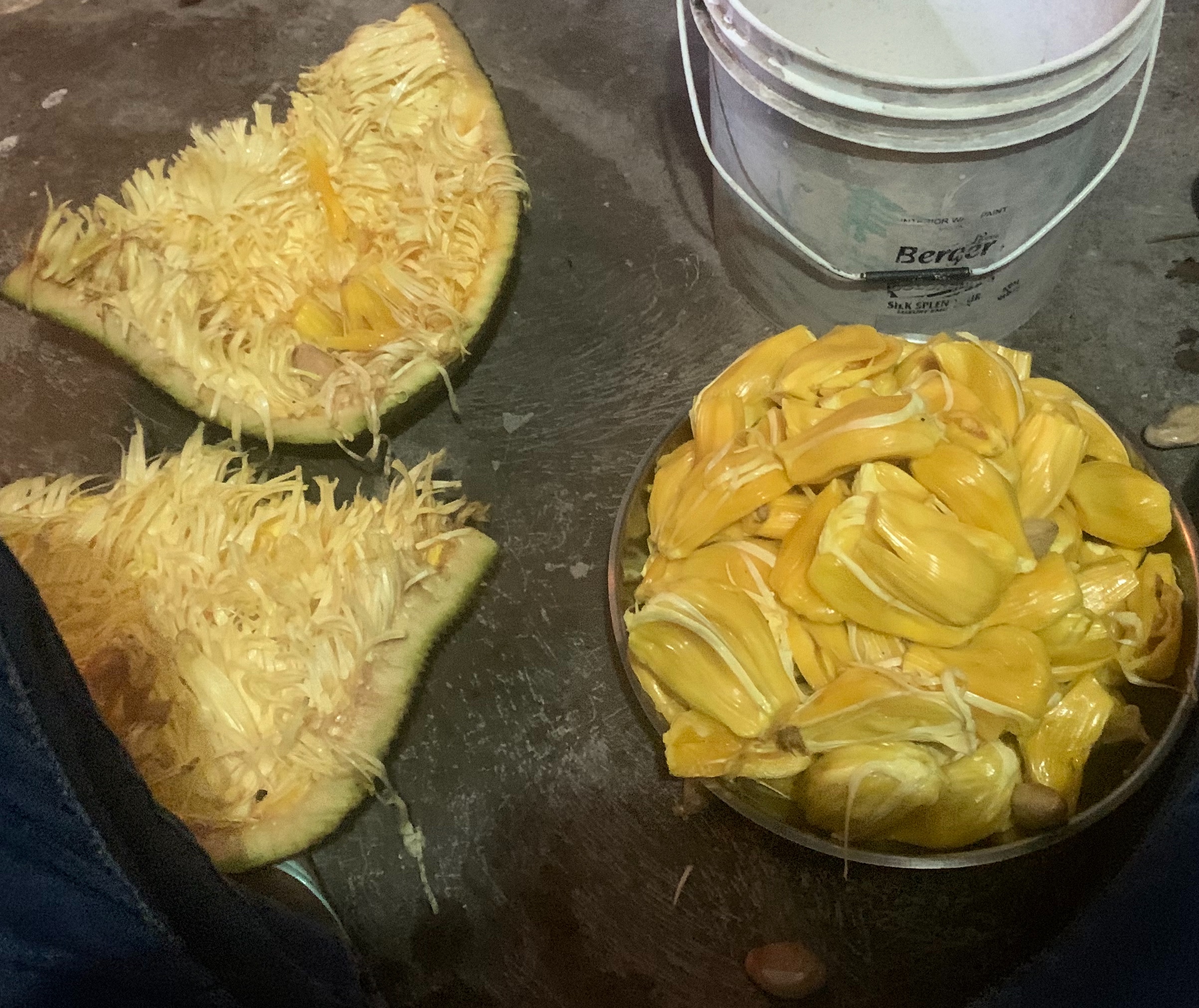